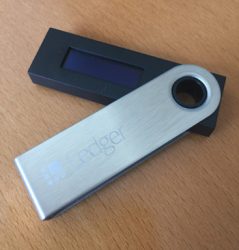 IOTA Ledger Nano support is right around the corner!

As Roman Semko said on Twitter, it won’t take long time anymore and IOTA will be supportet on the Ledger Nano S.
The community is waiting long time for this, since the Ledger is one of the most popular security items in the cryptosphere.
It makes storing your seed way more secure.
So it’s no wonder the community went crazy after hearing that it won’t take much time anymore.
The beta is already on Github, but make sure that this is only Beta and not the final product.
So use it just for testing purposes at the moment!
After the developers are ready there will be an audit by Ledger and if everything works fine, IOTA will be officially supportet by Ledger in due time.

#CarrIOTA #Romeo #LedgerNano support coming way sooner than you think! Time to get your hardware wallet ordered before they are out of stock! 😎🥕💪
Thanks to all the community members working hard on this feature! ♥️#IOTA #IOTAStrong pic.twitter.com/hZNQBmd4CE

This news is crazy to me, because i’ve been to a developer meetup just a couple of weeks ago and there it look like it would take ages till all the problems are solved.
Once again the developers peterwilli, Roman Semko and many others proved us, what great members this community has, since this whole project is not an official IOTA Foundation project.

So as Roman said in his tweet – Grab yourself a Ledger Nano before they are sold out!

And by the way: if you want to be on the safer site, only buy at Ledger directly – www.ledgerwallet.com.
There are many scammers selling manipulated Ledgers that will steal your funds.
So better buy a new istead of a used one.
Better safe than sorry.